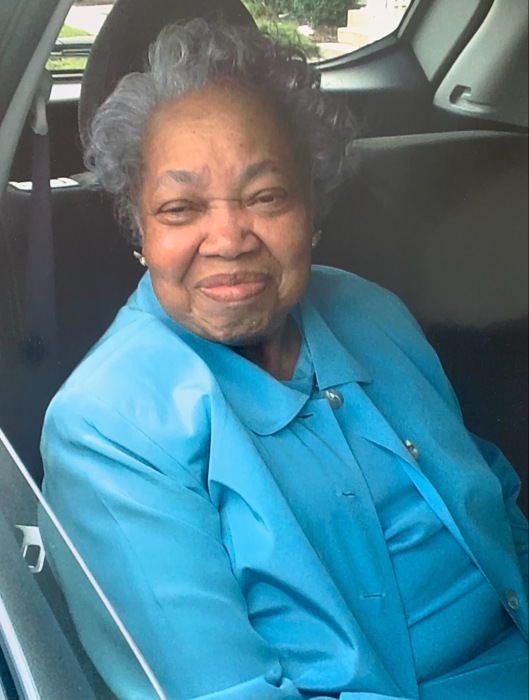 Mother. Matriarch. Queen. Mable Burt was all of these to her husband, sons and daughters,siblings grandchildren, nieces, nephews, friends as well as to her beloved community of Centerville and Bethel AME Church of Camden. Her benevolence was her crown and she wore it regally every day. She was a fervent advocate of the Bible and God’s Commandments. As a result, she sought to always represent, demonstrate, teach and spread the Love of the Creator.

Mable was born on February 1,1932 to Thomas and Luvenia Pressley in Nesmith, South Carolina. She was that youngest of 7 siblings. Mable attended and graduated from Brown High School in Nesmith, South Carolina and furthered her education at Morris College in Sumpter, South Carolina. She soon followed her sisters to Camden, NJ where she met and married the love of her life Frederick Burt who proceeded her in death. Family was everything to her. They lovingly raised 6 children, to be responsible, respectful and spiritual. She was a loving homemaker until the passing of husband when she had to enter the workforce. In 1985 she joined the Camden Board of Education as a Teacher’s Assistant at Bonsall Elementary School for 2 years before joining the YWCA as a youth teacher from where she would retire. She was beloved by the staff, parents and especially her students, one of which was her grandson, Aaron, Jr.

Mable espoused LOVE to all and dedicated her life to Christ at an early age at Friendship Methodist Church in Kingstree, SC. When she relocated to New Jersey, she joined Bethel AME Church in Camden where she held many active roles. She was a member of the church’s Stewards Board and has been Bethel AME’s clerk for more than 50 years. She was the umbilical between Bethel and her beloved Centerville neighborhood, as she regularly hosted, initiated and invited the community to take part in church programs geared to assist and uplift the neighborhood and the surrounding Camden area. She was a cornerstone of Bethel AME and the right hand to many Pastors throughout her lifetime at Bethel.

She was famed in the community for The Church’s Annual Sunday School picnic to Dorney Park. It was a permanent fixture on the calendar of the Church and Centerville’s residents for more than 40 years. There were several years that the trip needed at least 3 or 4 buses and a caravan of cars and vans to transport everyone. She was also known for her cooking and baking. Ask anyone who has ever had her fried fish, chicken, or a slice of her scrumptious cakes and pies.

She was a Philadelphia Sports fan. She liked the Phillies and Eagles, but absolutely loved her 76’ers. She tuned into every game and was a self proclaimed coach. Her house was a second home to many of her children's’ friends where she made sure they felt at home anytime of day or night.

Mable leaves to cherish in her loving memory, four children Hazel Bey, Barry Burt(Phyliss), Frederic El, and Aaron Burt Sr. Her granddaughter, who is like a daughter, Sheray Magagi(Abdul) and her sister Janice Coleman. She also leaves behind a host of grand children, great grand children, nieces, nephews, and Bethel AME Church. She was proceeded in death by her husband Frederick Burt Sr., daughter Linda Burt and son Carl Burt.

To order memorial trees or send flowers to the family in memory of Mabel Burt, please visit our flower store.