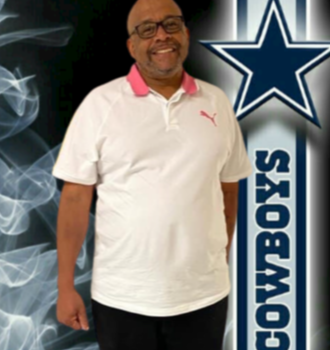 Jeffrey Lamar Ferren affectionately known as Jeff was born February 8, 1961, to the late James Albert Ferren and Annie Mae Everette Ferren of Elk Township, New Jersey where he grew up.

He was the youngest of 8 children. He attended Aura Elementary School and graduated from Delsea Regional High School.

Jeff experienced some hardships in life but in 1997 he made a conscious decision to turn his life around and he never looked back. Once Jeff put his mind to something there was no stopping him. Jeff was eager to be productive so he started working with his older brother Daryl cleaning groceries stores but that was not enough for him. He needed and wanted to stay busy. He became an active member of Bethany Baptist Church were attended for 15 years. But just being a member was not enough. He wanted to be a servant. Jeff began to work at Bethany, he worked at Bethany doing various odd jobs until he got his dream job at The Cherry Hill Triplex. Everyone that knew Jeff knew that he loved that job. He is a people person so being able to meet different people every day was right up his alley.

Jeffery loved to love and loved to be loved so it was only befitting that he found and married the love of his life Jeannette Thomas.  Jeffrey met Jeannette at church and their friendship swiftly grew into a courtship and they would shortly marry in February of 2001. From this union they would have one beautiful daughter Jada Ferren. They both were blessed with bonus children when they united, Jeffrey Ferren Jr (deceased),

Antwan Ferren, Jamere Thomas and Ja’Ondra Thomas. They were also fortunate to have two honorary

Despite his health issues, Jeff remained optimistic and never complained. He went through his challenges with grace and positivity He would always say “I got this” and for a long time he did. He never stopped living. He never missed an opportunity to testify that God was good despite what he was going through.

Jeffrey had a kind heart and it showed in everything he did. He loved to help those that were in need and whether it was giving you money, buying you something to eat, or even giving you clothes, Jeffrey would do it.  He wanted to be of service and that is what he did. Although he was no chef, you couldn’t tell him he wasn’t when he made his famous lasagna and seafood salad.  He was so proud of himself when he was finally able to make the seafood salad just like is sister Sue, you couldn’t tell him nothing.

Jeff loved The Dallas Cowboys and wasn’t shy about letting you know.  He was a diehard fan win or loses he still reaped his Cowboys.

He was preceded in death by his parents the late James Albert Ferren and Annie Mae Everette Ferren, his brother Maurice Anthony Ferren, his sister Vandalies (Sue) Lee his son Jeffery Ferren Jr, and his nephew Dayrl Bey.

Jeffrey was loved by all and will be missed by many.

We look forward to seeing him again in the resurrection when Revelations 21:4 will be fulfilled “AND HE WILL WIPE OUT EVERY TEAR FROM THEIR EYES, AND DEATH WILL BE NO MORE, NEITHER WILL MOURNING NOR OUTCRY NOR PAIN BE ANYMORE.  THE FORMER THINGS HAVE PASSED AWAY” Oh, how we ALL look forward to that day!

To order memorial trees or send flowers to the family in memory of Jeffrey Ferren, please visit our flower store.