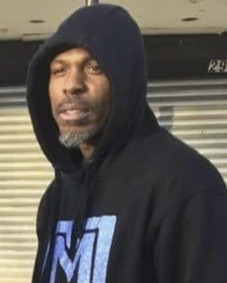 David Omar Damon 48 years old was born on February 20, 1974 in Camden, NJ to the late James Louis Damon and Lena Elizabeth Damon.  David went home to be with the Lord on January 14, 2023.

Affectionately known as T’Roc to Family and Friends, T’Roc was raised in East Camden with 10 siblings.  He attended Camden High where he received his diploma.  T’Roc made nice bonding relationships with everyone.  Everywhere he went he knew someone or he was going to make sure you knew him.  By the time you left him you were now his “cousin”.  He spent a lot of time talking on the phone with his twin Daniel (Max) Damon, but most of his time was spent with his East Camden friends/family.  Every friend became family to him.  Prior to his passing, T’Roc expressed to his wife how much he wanted to travel and they did just that.  Every state they traveled to, even when they went to the Bahamas T’Roc sparked up conversations with anyone he came in contact with.  His smile and charismatic presence always left a lasting impression.  He was such a diehard Philadelphia Eagles fan that there was a point in time when he was working at the Stadium and he loved every minute of it.  Being the people person T’Roc was, his bosses even let him watch the games most days instead of working.  If you knew T’Roc you also knew he loved kids.  He worked in after school programs and would go all around New Jersey to help kids sign up.  He had such big dreams from working in music creating T’Roc and Max Entertainment to opening his own Restaurant, Damon Steaks, to even buying a Food Truck so he could make a name for himself cooking Soul Food “with love” all around the City of Camden.

David is preceded in death by his father James Louis Damon, his nephews Daniel L. Damon and Jerome D. Damon.