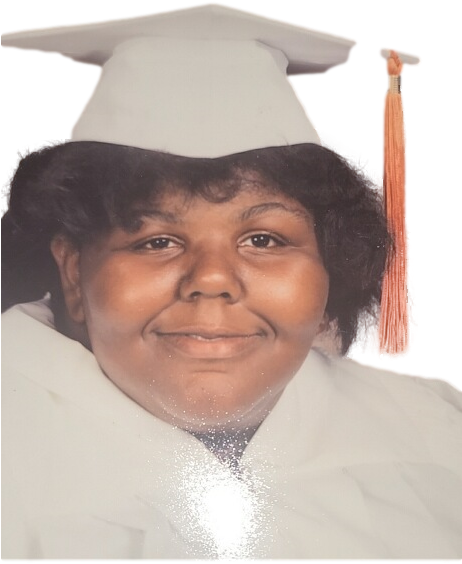 On April 4, 1977 in Woodbury, NJ, a sweet, gentle spirit was gifted to us. The gift-givers, Josette Brown and Daniel Young, named their gift Danielle Arlen Young, affectionately called “Danni” by many.

Danielle’s education was in various schools in Camden & Gloucester counties in NJ and even in San Diego County in California for about 9 months. That was due to having a mother, who was one of the few people known, that loved to move. Danielle liked the simple life and once Danielle left Woodbury to move to Glassboro in 2014, that is where she stayed.

Although Danielle was diagnosed with lymphedema at a very young age after undergoing a gastric bypass surgery and was dependent on a wheelchair from then on, Danielle never let that stop her from being the person she was nor did she let that stop her from doing what she loved. She was a strong woman with a strong mind. She was very independent, living on her own and pretty much did everything from cooking and washing dishes to washing clothes to managing her own medical responsibilities. Danielle was most often seen in Glassboro riding downtown in her power chair with about ten grocery bags in her hands while being able to control her power chair at the same time. People often looked at her crazy and probably wondered if she needed help, but she was definitely one of a kind. This was what gave her the nickname “Bag Lady’ which always bought a smile to her face.

Danielle enjoyed listening to music and watching movies especially from the 90’s era. Danielle was a collector of cd’s and dvd’s and that included some that did not belong to her. When they were discovered in her possession, she would just simply say, “Well they were just sitting around collecting dust, so I gave them a purpose.” Who can argue with that? It was no surprise that Danielle’s caring nature allotted for her love of children and always had kids around her and grew up taking care of cats, dogs, hamsters, and bunny rabbits. Danielle pretty much loved everyone and everything, but the color jade and giraffes were here favorite besides talking, talking, and more talking, loudly that is. Although very much played out, she was such a die-hard fan of General Hospital that she knew all of the characters and the storyline from start to finish and joined every General Hospital fan club that existed and even had written a novel on google docs featuring all of the characters. Most of all, Danielle’s favorite past-times were spend with her only child, her daughter Rahyell. Danielle was everything to her daughter and did anything for her daughter. Some of the best memories to cherish were the mother-daughter outings as Danielle rode around Glassboro with her daughter by her side just talking about what was going on in their lives, Rahyell’s future college plans as she headed off to begin another semester, and just laughing and joking around with each other. These moments was what made their bond so special.

Danielle was a mother, daughter, sister, aunt, cousin, niece, grand-daughter, and friend all in one. There are so many words in the world to describe her, but the ones that jump out are kind-hearted, gentle-natured, determined, caring, loveable, friendly, and humorous. She had a big smile and a big laugh. She was definitely loved and adored by family and friends and she will be greatly and forever missed by all. She was just taken too soon and nothing can replace what a wonderful and magnificent person she was.

Danielle leaves to cherish her memories her only daughter Rahyell Aleya Young, her only sibling, her brother Marquise Willis, her Aunt Deborah Young-Johnson, her uncles Kerwin and Dwayne Matthews (Marian) and Tony and Gary from the Young family and a host of cousins and friends.

To order memorial trees or send flowers to the family in memory of Danielle Young, please visit our flower store.