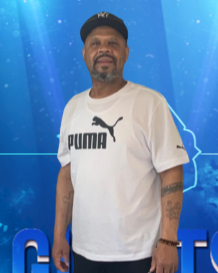 Bernie Jessie Marshall was born February 18, 1967 in Anson County, North Carolina to the late Catherine Gibson and Bernie J. McCoy, raised and fathered by the late
Raymond Gibson. He passed from this life into his eternal life on November 24th, 2022 at Cooper University Hospital.

BJ aka Bizz (as he was affectionately known) came to New Jersey in 1971 where he lived out the remainder of his life. He was one of the most loving, funniest, sweetest guys you would ever want to meet. BJ was so full of love and life. He made hard times bearable. His smile would light up a room and his personality was just as big as his smile. BJ was loved by all that knew him and he was known by many. He was easy going, he didn’t like conflict and confusion. He wasn’t the one to argue with you, but always had a few jokes for you. His laugh was hearty and infectious and boomed as if speakers were attached. Even in his laugh you could hear his love. BJ knew how to be a genuine friend. If he was with you while you were up, trust and believe he’s gonna be there for you if you're down. He didn’t care how others felt about someone. If he likes them, then that's what it is. His love for his family was deep, the one he came from, the ones he created and the family he made along the way. He was a gift of light that shined no matter how bad the storm got. BJ was educated in the Camden and Gloucester County school system. After leaving school he moved out East Camden with his aunt and grandmother and that is when life began for him. BJ did a lot of things growing up, some good and some bad. The best thing that ever happened to him was becoming a father. When he learned he was going to be a dad for the first time, he couldn’t be more excited. He got a job at the Our Lady Of Lourdes Hospital working in dietary for about 2 years and later joined the Sonshine Window Company, where he has been employed for the last 26 years. The Sonshine Window company was more than a job, it was his family. They loved and treated him like he was one of their sons. BJ's sole purpose was to be the best dad for his children and he exceeded highly in that department, his children was his heart. And no wasn’t in his vocabulary when his children were involved unless it was an unreasonable request. Our father always told him if you are going to make babies, make sure you show up for them. He always told him a man shows up. No one showed up more than him. He made sure his children knew who he was. Even when he lost his way for a while, he still showed up. BJ loved his NY Giants I don’t care how awful they played, he rode for his Giants. He loved engaging and annoying his great nieces and nephews then giving them money to go grab snacks. BJ loved singing( more like mumbling) and listening to music. He enjoyed his Bud light and chatting up with his friends downtown. He was such an old soul that enjoyed living life. He loved to make you laugh and it came so naturally to him. His love, his smile, his laughter, his style and his life will truly be missed forever.